Outside Magazine podcast with Joe Stone

Trying to fit 4 years into 87 minutes:

One of the great challenges of producing a documentary is trying to include enough detail to respectfully and authentically tell a story, while also keeping the story engaging and moving.  I first met Joe in summer of 2012 and over the next four years we filmed hundreds of hours of footage and dozens of interviews which were eventually had to be edited down an 87 minute film.

My greatest personal struggle during the process was that so much of the great content about Joe and his story had to end up on the cutting room floor during the edit because we just couldn’t include it all. If we had it probably would have been a 30 part docu-series!

The rest of the story: 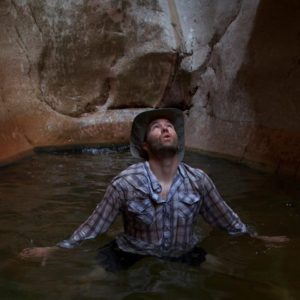 Enter, Peter Frick-Wright a writer, creator, producer, storyteller, and radio maker from the Pacific Northwest. He’s a graduate of the Salt Institute, where they teach radio storytelling, and also a mountain biker, bug-eater, and frequent contributor to Sierra, Men’s Journal, Outside, and Bike.

Peter had been producing a podcast series called Thirsty Minutes West aka 30|m|w  and recently joined up with Outside magazine to launch The Outside Podcast. The first miniseries is on the Science of Survival, which is just like it sounds: stories of life and death, specifically how our bodies respond to heat, cold, being struck by lightning, and being trapped underwater.

We were thrilled to learn that Peter had connected with Joe last fall, just as we were completing the final production of It’s Raining, So What. He was interested in learning more about Joe’s life and experiences surrounding his accident and recovery which ultimately resulted in this great two episode podcast in the Outside series. 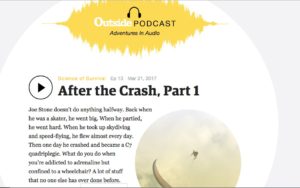 So whether you have seen the film or not, these two riveting episodes, created and produced by Peter, really shed a light on many of the aspects of Joe’s story that we were not able to include in the film. When I listened to them for the first time I was in awe at the level of detailed storytelling and knowing Joe, his family and Amy as well as I do, I could visualize every moment of our journey all over again. I actually had the thought at one point that this would make a great movie some day!

We are so honored to share this great podcast with you and encourage you to let us know what you think about it, what you liked, and what you learned.  If you like it please share it with everyone you know!

Many thanks to Peter Frick-Wright, Joe Stone, Outside Magazine, and The North Face (and their new Apex Flex GTX jacket) sponsor of the Outside podcast, which by the way if you want to say “it’s raining, so what!” this Apex Flex GTX jacket is the perfect thing to help you do that!

Can you think of a song that immediately brings back a special memory? Have you ever noticed how quickly the first few notes can put you in a totally different place or stir up a strong emotional feeling?

The power of music has always intrigued me and drawn me in. As a visual storyteller I have a great appreciation for the significant roll the right music can play in truly enhancing and conveying the emotion and impact of a film.

When we first set out to produce this documentary, Joe and I often talked about our deep connection to music and how it plays such a major role in our lives. For Joe this was especially important throughout the course of his rehab and recovery. In many ways music actually can actually become the soundtrack for our lives, allowing us to replay memories and change our emotions in an instant.

As we near completion of the film, one of the last aspects of a production is creating the soundtrack and score. This is such a special time because of the incredible relationship between the story, the sounds, the music and the visual imagery. Everything has to work together to create the right emotional experience. To help us make that happen we are thrilled to announce that Korby Lenker has joined the It’s Raining, So What production team as our music director, composer and supervising producer. 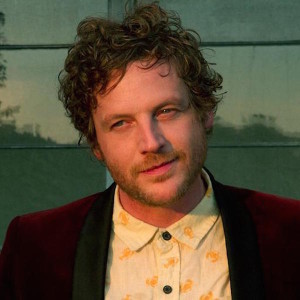 Originally from Twin Falls, Idaho, Korby now makes his home in Nashville, TN. As a well established indie singer, songwriter, performing artist, author, and multi instrumentalist, Korby approaches songwriting with a unique  sense of curiosity, as if each time he writes a song he is journeying into unknown territory, never really sure where it will lead. That sense of adventure, simplicity, and spirit of pushing up against the boundaries of his comfort zone to write meaningful emotion filled songs is one of the many things that led us to him as a great fit for our film.

“I like it simple,” says Lenker. “I just do. As soon as there’s a weird chord, I’m like, ‘Why? That’s all been done. Who cares?’ What’s really hard is to hit people in the heart and to reach them. That’s what I’m trying to do: make music that’s easily likeable, but with a kind of secret sophistication. I’m always trying to write a song that you can hum along with on the first listen. You’re like, ‘Yeah, I’d like to hear that again.’ Then maybe you hear it 20 times and you’re like, ‘Damn, that’s actually something I’m going to think about now.'”

But there’s a lot more than that to his instinctual, unorthodox journey from being brought up as a mortician’s son in rural Idaho to being recognized as one of the more innovative voices in Nashville’s current music scene. Korby has recently returned from touring in Europe, and has opened for artists like Chris Isaak, Willie Nelson, Ray LaMontagne, Nickel Creek, Keith Urban, Susan Tedeschi and Tristan Prettyman, and others. He is currently working on his seventh studio album “Thousand Springs” and just got his book “Medium Hero” published.

Over the years he has developed a great network of passionate and talented musicians, songwriters and artists and we will be collaborating with some of them as we create the soundtrack and score for the film.

I recently had the great pleasure of recording a podcast with Korby talking about his background, life experiences, and his creative approach to songwriting, film scoring, his latest book release “Medium Hero” and much more. We invite you take a listen to it and share it if you know someone who may also enjoy it!

Through my conversations with Korby we discovered how the same concept of running up against “perceived limitations” is very much present in the world of creative artists as well. I was fascinated to learn about some of the times Korby runs up against obstacles in the songwriting process, and what he does to acknowledge them, push through them, or go around them rather than giving in to them. This has led Korby to ultimately write and release songs that have had a significant impact on so many other people, thereby becoming a part of the soundtrack of their lives.

One such song which is very much a part of my soundtrack and definitely many others as well, is Korby’s song My Little Life. Check it out and see what you think!

The most exciting part of all of this is that we are getting very close to releasing this film with a very special emotion filled soundtrack! Additionally we are working on producing a soundtrack album which will feature music from, and inspired by the film It’s Raining, So What. We are happy to have you with us on this journey and we will be sharing more about some of the artist who will be featured in the film and on the soundtrack album as we work on it. So stay tuned.

In closing I have to share this quote from Korby, which I felt was so perfect for this blog post

“One of my favorite musicians in the world, bassist and composer Edgar Meyer once said in an interview ‘The boundaries of music have been and always should be limitless.’ I couldn’t agree more.”

What song brings back a significant memory for you?  We would love to know. Feel free to let us know in the comments below!

You can check out Korby’s website www.korbylenker.com where you can find his albums and other super cool merchandise, as well as his touring schedule and some other fun surprises.

Available for pre-order now on Amazon.com

I recently had the pleasure of talking to Amy Rosendahl, Joe Stone’s fiancé, about some amazing life lessons she learned while training for the upcoming IRONMAN Coeur d’Alene, which she’ll attempt on June 28, 2015.

In 2009, Amy had little to no running experience. She started setting bigger and bigger goals in the next few years, running five marathons and a few sprint triathlons. Just last year, she completed her first 70.3-mile Half IRONMAN in Boise, ID.

Through her experience supporting Joe in his IRONMAN attempt in 2013, Amy gained a full appreciation for the dedication, hard work and determination required to accomplish such a feat and decided to give it a try this year. For the past eight months, she has committed to a strict six day a week training regimen as she prepares to swim 2.4 miles, bike 112 miles, and run 26.2 miles — all within 17 hours.

Through this challenge, Amy has learned a lot about what it takes to successfully train for and continuously move towards accomplishing such a large personal goal. The process has revealed many incredible secrets and breakthroughs that can be applied to all areas of our lives.

Here are Amy’s top five life lessons learned while training for an Ironman.

UPDATE: On June 28, 2015 Amy successfully completed her first full IRONMAN triathlon.  She covered 140.6 miles in 15 hours, 51 minutes and 20 seconds pushing through temps as high as 105 degrees!  We are very proud of you Amy!  Congratulations!

IT”S RAINING, SO WHAT Podcast:  Episode 1 –  Learn more about Amy’s personal experiences and insights gained on her inspiring IRONMAN journey.        Recorded May 21, 2015